Malaysia Airlines plane parked at a gate. Photo from Bing Search, I do not own the copyright or this photo.

In the Aviation community we may wear different uniforms, believe in different things, come from different backgrounds but when a tragedy strikes we are all one huge worldwide family. When the news of Malaysia Air 17 being shot down over Ukraine, sadness and tears were shed not only by the families of the victims but also by the entire aviation world. We are a small somewhat dysfunctional family at times but just like regular families when tragedy strikes we’re there for one another. Facebook is one of the greatest tools to see this in action with in a short time photos and bios of the crew were posted as well as prayers and signs of support, all showing Malaysia Airlines that we, their global family are surrounding them with love and hugs. I didn’t personally know any of the crew but I don’t need to, just like when I start a trip with a person I don’t know, we have common interests and it makes it easier to form even a short friendship or kinship and sometimes they can be life long friendships. I will turn to Judaism’s ritual prayers for mourning and say Kaddish at least for 7 days for the crew and their passengers of #MH17.
May their memories be for a blessing. 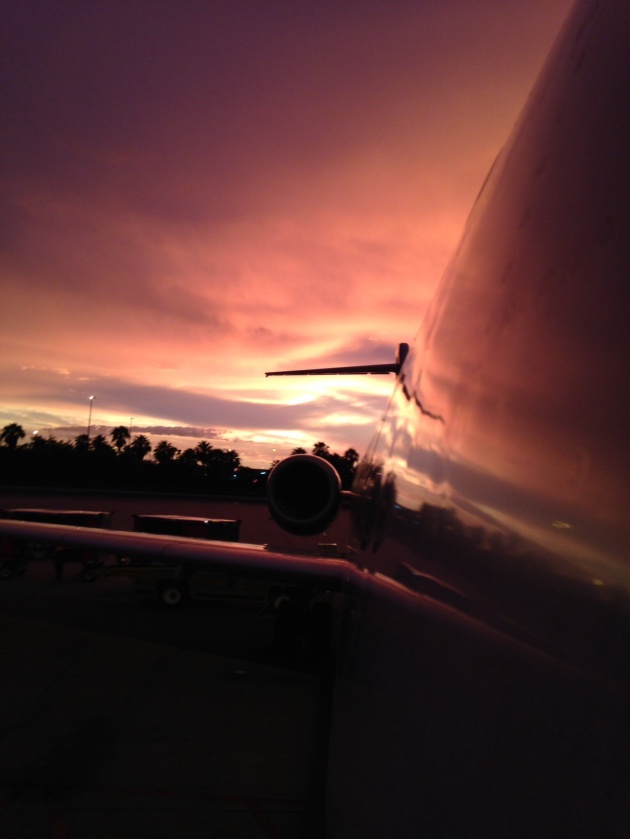 May every day be peaceful like this sunset. Photo taken by me at MCO airport at sunset.

It’s been a few weeks since I wrote last, I’ve been on vacation since June 20th and have been at home in Florida, visiting with my Aunt and just chilling. Florida may be called the sunshine state but these past 2 weeks I’ve been here it’s rained pretty much everyday in the afternoon, sometimes just a sprinkle other times a violent thunderstorm. For example I was at at my aunt’s job yesterday and right at closing time the skies got black it started pouring, like sideways rain, and lightening and thunder that shook the building. One bolt in particular flashed inside her office and scared the living crap out of us, it took out quite a few electronics and really fried a computer at the sister office down the road. I have been down here since June 30th, I celebrated the 4th here, we went to my Aunt’s boss’ house on the St. Lucie river to watch the fireworks, Mosquitos here in north, south Florida are no joke. I have bites all over me, his house was covered by mosquitos and watching the fireworks was fun but not fun. Fun because we were the only ones there, we had unobstructed views of the St. Lucie stadium, Stuart and other people’s own fireworks, but not fun because we both were getting eaten alive.
We also went to this pretty cool historic site in Lake Wales, Fl, called Bok Tower. It’s the estate of author Edward Bok, it’s built on the highest natural point in Florida and has walking trails, gardens, coy ponds, orange groves and a Carillon;which is supposed to be the highlight of the estate. It’s 60 bells in a tower that play a concert twice a day. This is July, central Florida, sunny, and HOT. Not the best time to go but hey you live and learn. We also went to a place I haven’t been since I was a kid, Lion Country Safari, it’s west of West Palm Beach and it’s a drive through safari and nature preserve. It’s fun, you get to see a lot of animals that are endangered all in the comfort of your own air conditioned car. They also have a walk around section that’s geared mostly towards kids but adults can have fun too especially if your quick with your camera on your phone and snap a quick selfie with a giraffe. 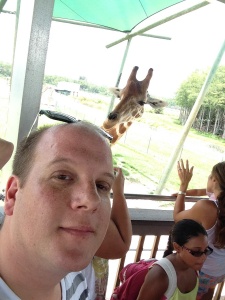 I also fed it romaine lettuce, you can get somewhat close to them, he licked my hand as he was taking some of the romaine. It’s started pouring and we ended up standing under trees waiting for it to stop. The rest of the time was just spent relaxing and hanging out with my aunt.
I went back to work on Monday and I’m flying with a friend of mine on an easy 4 day trip. I have 9 days total to work this month and they’re all easy days.